I’m dying. If you haven’t heard of Lil Bub then you should search her out! She is a very precious and precocious cat who was  born with a multitude of genetic anomalies which you can read more about on her website lilbub.com. She was born the runt of an otherwise healthy feral cat litter and  adopted by her dad Mike. Lil Bub is most well known for her outer space travel and her love of yogurt. And now Lil Bub has her very own talk show!

I may like holidays a little bit. Okay that is a total lie, I LOOOOVE holidays. LOVE THEM! And my holiday love is indiscriminate. Some people really love Christmas or Thanksgiving or Halloween and they go all out for that one holiday. (Aidan adores Christmas and starts celebrating it November first, now that he’s an honorary american though I try to force him to wait until after Thanksgiving). I however love all the holidays and that love is apparent in my over excitement in decorating for and celebrating each holiday.

Halloween is no different of course. This year Aidan and I decided to have a Halloween party (mostly I decided). And I got so excited! Almost everyday for the last two weeks I’ve come home from work and had to confess to buying more decorations. I kept thinking of fun ideas for the decorations or for the food and for my and Aidan’s costumes. My mother also loves Holidays and she had sent me a care package full of candy and decorations! 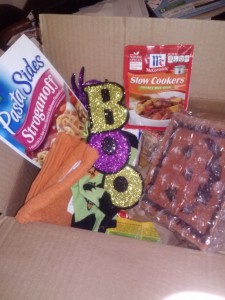 So this past Saturday Aidan and I threw a Spooktacular Halloween party! Our friends all came over and we had snacks, listened to creepy music and had some good conversation! 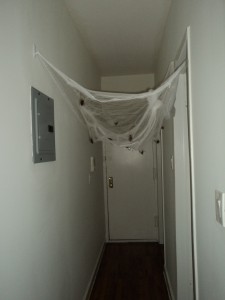 This was our entry way. Whenever a new person arrived we turned off the lights and had a strobe light going and Aidan played the theme from the x-files, it was a great way to welcome guests! 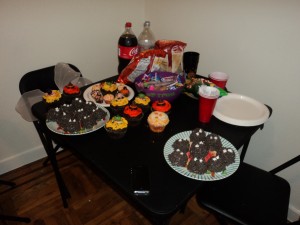 We had some Halloween cupcakes from Crumbs and I made Rice Krispie spiders with gummy worm legs and bat shaped pumpkin chocolate chip cookies. 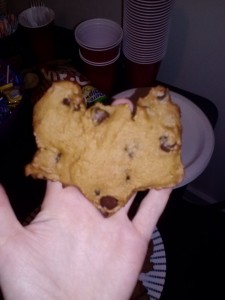 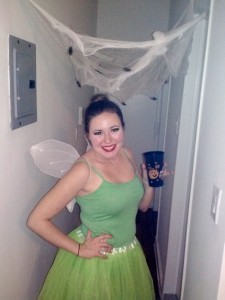 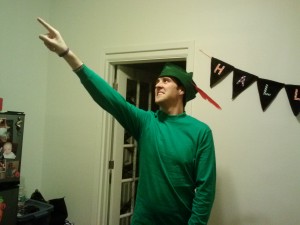 My favorite decoration was probably this: 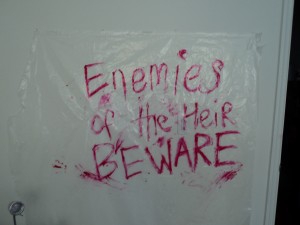 All and all it was a great night! 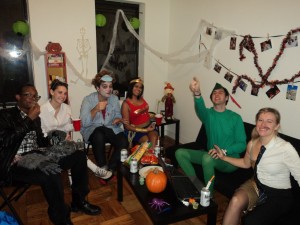 Check out the rest of the pictures from the night!

Lily Myers is a student at Wesleyan University in Connecticut, this poem by her captures so much of what I felt growing up with my mother and how so many girls are unknowingly taught to be. “I have been taught accommodation” she exclaims, and I relate so much to that, always apologizing, always saying yes, always helping out. Lily captures this difference in the way we as girls were taught by our mothers to be congenial so eloquently. Definitely worth a listen!

Last night Aidan and I were chatting about the impending debt ceiling crisis and watching videos on the internet (how very generation y of us) about what just might happen if congress doesn’t get it’s act together. One video on BBC news explained what may happen in 90 seconds stated that the U.S takes in approximately 6 billion in tax revenue daily, at that point Aidan exlaimed “6 billion, wow” and I asked him how much the U.K took in daily (Aidan is from England). He didn’t know so I said we should figure it out; if the U.S has about 300 million people and the U.K has about 60 million then the U.K probably takes in a little more than 1/6 th of the U.S revenue. Aidan thought I couldn’t be right because our systems are so different, so we did a little research and turns out I’m right. According to the Guardian the United Kingdom collected 542.9 bn pounds in tax revenue in 2011-12. Divide 542.9 by 365 and you get 1.5 bn pounds a day, which without taking into account exchange rate, is exactly 1/6th our tax revenue. So to give you more watered down math this means the UK and US collect exactly the same amount of tax revenue per person.

So why can’t the U.S afford universal health care for it’s residents? Yes I know that the U.S and U.K are not identical, we have a much bigger country, we have a different place in the world economy, and we our much less homogeneous population wise. But, really America why can’t we afford to take care of our residents? Every other developed country has a universal health care system in place, why are we still refusing to take care of our children and elderly in this way?

I don’t understand how you can  be elected by the people and then turn against so many of them this way. I’m not trying to make this political really, even though it inherently is, but just learning this one fact  about the two countries really shook up my view. We are letting our government officials tear our country apart, all parties are to blame for the bipartisanship that is occurring. It really is scary that it has come to this, holding our countries economic (and overall) well being hostage until your side wins is something so evil, selfish, and self serving that it really makes me ashamed of my countries current leaders.

It is  normally recommended to switch off remote access on routers but if your router is made by D-Link then you should especially revoke access. END_OF_DOCUMENT_TOKEN_TO_BE_REPLACED