I have some confessions; first I haven’t seen Frozen. It’s not that I don’t want to see Frozen, it’s just that I refuse to pay $20 for a movie ticket to see Frozen when I could wait four months and rent it at Redbox for $1.50.

Second, I have listened to Let It Go sung by both Idina Menzel and Demi Lovato multiple times and it has never gotten stuck in my head. But I still found this Honest Movie trailer for Frozen to be hilarious. Mostly the part about the men being portrayed as awful, because  of course the logic is if we have a movie about powerful women then the men can’t also be powerful. This is my issue with some of what’s happening with feminism in regard to little girls right now. I don’t have a daughter or any children for that matter, but I was once a little girl. I grew up watching Cinderella, Beauty and the Beast, Pocahontas, and Mulan. I went as Belle for halloween one year and had a Cinderella birthday party and I memorized all the lines to Pocahontas and I grew up to be a happy, fiercely independent young adult.

I grew up on Disney movies, and yes some of the female characters fall a little flat, Cinderella, but Belle gets  a harsh rap from Feminists. For some reason everyone seems to think she tamed the Beast with her beauty, false! My six year old self will tell you that the beast fell in love with her because she was nice to him even though he was different. Being nice to people even if they are different is a great moral to teach any six year old. 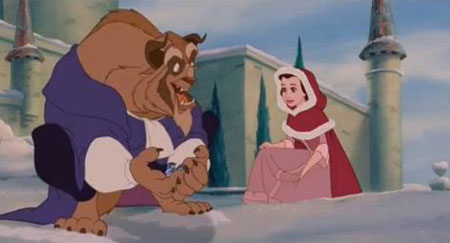 Stop worrying about the messages movies are sending your children and worry about the messages you are sending instead. Teach them that movies and T.V shows aren’t real life but are for entertainment. If your daughter is like I was  then she may just go through a phase where she wears her Belle dress to school and even sleeps in it, she may want to be a princess right now but trust me she’ll grow out of it. As long as you don’t treat her like a princess in the sense that you give her everything she wants right when she wants it, or praise every little thing she does instead of praising things she puts effort into then she will grow up knowing that she can take care of herself with a little hard work, perseverance, and the right tiara.