The New issue of Elle Magazine’s cover story was about women in T.V and it highlighted New Girls’ Zoey  Deschanel, Girl’s Allison Williams, Parks and Rec’s Amy Poehler, and Mindy Kaling among others. Elle released four separate covers, one for each above star.

Notice something different about the covers? Not really? Yeah me neither, but the internet exploded calling Elle “racist and fat-ist” for only showing Mindy’s upper body and for putting her in black and white instead of color. Here’s the thing, we’ll probably never know the person on the other side of the photo-shopped cover’s intentions but we do know that Elle probably employs tens if not hundreds of graphic designers and photo editors and I’m assuming the person who worked on Mindy’s cover probably was not the same person that worked on Amy’s. Yes they were all most likely approved by the same team; but there are literally thousands of decisions, from makeup to wardrobe to Photoshop, that go into a cover like this and it’s hard for me to believe that there was one person making a bigoted decision to change Mindy’s cover. And it points more at the people making accusations that they took such notice of the differences in the beginning. Mindy’s cover shot is beautiful, just like the others. They made her look good; isn’t that their job.

And this is why I could never be famous. I would be awful at handling things like this. Having millions of people dissect every little thing about me, my life, or choices that were made for me (such as black and white vs. color magazine covers) would make me melt into a weak puddle on the floor. Mindy Kaling is much better at handling these things. The star herself defended the photo on Twitter. 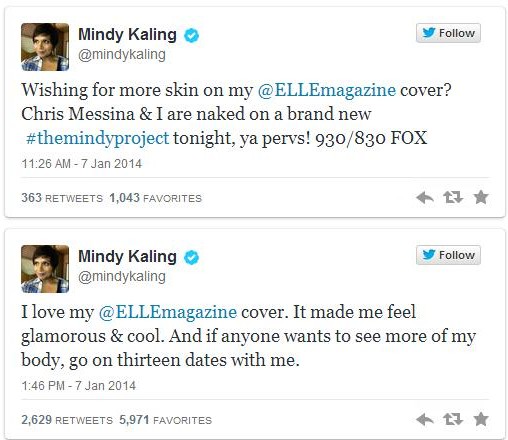 The internet will always breed conversations and accusations like this one. Which is probably why the more grounded celebrities handle them with such ease, because they are so common. I still say better them than me.

What do you think? Is Mindy’s cover racist or fat-ist? Do you think Elle was trying to cover her up or just bring out her glamour? I’m interested to hear!