Potter fans hold on to your seat because you might hate me in a minute. I mentioned in a past post that I loved the Harry Potter books and movies and I separated the two. Here is the short explanation for why: I have always considered them to be two separate works of art that should be celebrated for their differences not compared. Not satisfied? Okay okay, I’ll tell you the long version, but don’t say I didn’t try to spare you. 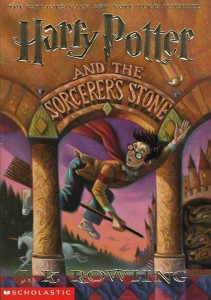 My sister was two states away at college and I was the only child in a very broken home. I was ten, an awkward age for anyone, but made more awkward by the fact that my parents were divorced, my father was living in China for business, and my mother was hardly ever home. I was a pretty lonely kid who felt like she didn’t fit in, (cue tiny violin for middle school sob story). All I wanted was to move far far away from where I was, to be anywhere but there. Then I started reading the first HP book. Here was another ten year old whose family wasn’t whole and spent his days lonely and confused. I was hooked. Then something magical happened, pun intended, this boy learned that it was all a mistake, that he really didn’t belong and he was going home. Yes this realization came in the form of multiple owls and Hagrid, a giant, but I still thought maybe just maybe it could happen to me. That I was special, too. That I didn’t belong either. Because that is the beauty of the Harry Potter books; they make you believe. 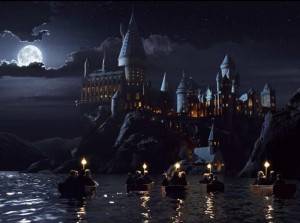 I know this feeling was not exclusive to me but at the time I was very literally saved by Harry and his friends.

And in 2001 when the first movie came out in theaters I was there at the midnight premier. But I knew that to love the movie as much as I loved the book, or rather, to keep my love of  the books intact  I had to separate the two. So when I watched Harry Potter and the Sorcerers Stone, I refused to compare it to the book. Personally I think this shows pretty good insight for an eleven year old.  I devoured each book. I felt a closeness to Harry, and as corny as it sounds the books gave me hope that I could get out of my situation, that things could change and there was a better life waiting for me. 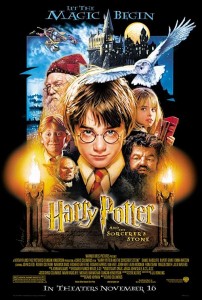 There was no point in saying things like “Harry didn’t look that way in my head”, or”they took out the part where Neville and Harry hug”!! (I made that up because I’m too lazy to look up scenes cut from the movie, I can almost feel the mob of Potterheads lighting their torches). I knew if I thought about the movie that way it would ruin not only the movie and the first book but all subsequent books to come.

So from then on I  evaluated each book and corresponding movie as different ententes and because of this I love both mediums. And I have different  favorites. My favorite book is the fifth for a lot of reasons but mostly because that’s when Harry and gang start taking action. But my favorite movie, also for various reasons (Dobbie), is seven part one.

This does not make me less of a Harry Potter fan and my basis for that assertion is as follows. I reread every book in order each summer before the new book  was released and have continued this tradition even now that the series is done. And whenever I have trouble sleeping I put on a DVD of my childhood friend Harry to comfort me as I drift off to sleep.