In two weeks Netflix will release their newest straight to streaming series, the final installment of Arrested Development. These episodes are years in the making. Once slated to be an Arrested Development movie, then straight to DVD release, have now officially, finally, been made for Netflix. This is not Netflix’s first straight to streaming endeavor, House of Cards was released earlier this year, and Hemlock Grove released in April. However, both previous series were new, at least to the U.S (House of Cards is a remake of a British drama), but neither series had one thing that Arrested Development did; a ready made fan base. Arrested Development was a cult classic that over the years has amassed quiet a large following. Also the excitement for the new episodes has been building for years among rumors that they would never happen. Now Netflix is presented with a  very rare occurrence, they have the unseen, new episodes of a widely liked and followed show premiering on their streaming site. Netflix has made some mistakes over the years, Qwikster, the rebranding of the DVD service being probably the worst. But for me the way they are handling the Arrested Development launch says a lot about the new direction the company is trying to take.

AD already had a significant following, and fans were ready and excited and a bit curious for these new episodes, it could have been easy to advertise the regular way, or not really advertise at all. Instead Netflix saw this as an opportunity to play around.

The other day I was looking for a comedy movie to watch when I saw this: 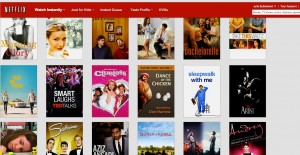 In the middle of my Netflix page was something called “Dance of the Chicken”, intrigued I hovered my curser over the title but the expected dialogue box did not pop up. Curious I clicked. And I was directly transported to this: 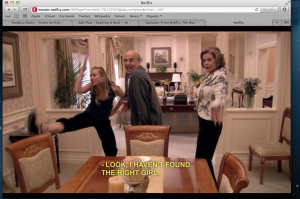 Season 3 Episode 2 “For British Eyes Only” where Michael Bluth’s family calls him chicken and proceed to do some very interesting chicken dances accompanied by even more interesting “chicken” noises. It was perfect. It made me laugh, it made me want to rewatch the episode, and it got me excited for more.

Network and cable T.V do not have this opportunity for viewers to stumble on advertisement, and it makes sense that Netflix would and should continue to play around with this. They have one of the leading internet streaming sites, which means they are afforded a new and inventive platform to play around with. Arrested Development season 4 is going to get views no matter what, the cult following is big enough and excited enough. It’s partially Netflix’s job to bring in new viewers, but what better way to test advertising strategies than with a show that’s already solidified? It’s much less risky than launching your new program at the end of an apology note, like they did with Qwikster. And the rewards could be huge.

We’d love to know what you think, is this an effective way of advertising for something like Netflix? Should they continue to experiment with different techniques?