This past week I was in Ireland on an impromptu vacation, my cousin Shannon had won a hotel stay and redeemed points for plane tickets, so I found myself skipping class and internship to enjoy the Emerald Isle.  Monday night while my cousin and I were eating a late dinner in the hotel I received a Facebook message from my boyfriend Aidan: “There are reports of two explosions at the finish line of the Boston Marathon”. Me: “wait what?” I could not comprehend what he was saying. I began reading Aidan’s messages of the news play by play taking in only snippets. “Nobody knows how many injured…”, “dead…”, “suspended T train service…”, “may be more bombs…” I read all of these as I sat in an almost empty hotel restaurant with the Atlantic Ocean behind me and all I could think was “this can’t be, right?” Maybe it was the fact that I was thousands of miles away, but something wasn’t registering with me. We went back to our hotel room and turned on BBC news. And that’s when my stomach started to hurt from the weight of what was unfolding. My cousin called her husband in NYC and we spent most of the night watching the one video footage of the bomb going off being replayed on the news and following Twitter. After a while Shannon and I gave up, realizing there was no new information and it was after one in the morning in Ireland, we went to sleep. 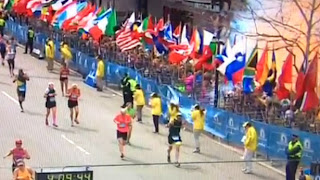 Camera footage of Boston Marathon explosion
As I laid in bed my mind kept going back to the day when I was five and my family was living in Edmond, Oklahoma a suburb about 15 miles north of Oklahoma city, I was sitting on my parents bed eating cereal when our house shook so violently that my grandmother, who was in our kitchen, thought the back of our house had exploded. I dropped my cereal bowl and ran towards the kitchen; my grandma ran right into me and kissed me. I remember her picking me up and walking onto our front porch. The explosion had felt so close that my grandma thought it had to be near us but when we looked around we didn’t see anything unusual. We went back inside and turned on the news where we learned that a bomb had exploded outside the Alfred P. Murrah building in downtown Oklahoma City. I laid in my bed in Ireland and thought about later getting Time magazine in the mail with the picture of baby Baylee, her lifeless body being carried out of the rubble by a firefighter. And I remembered writing baby Baylee a card and my mom taking me to the memorial wall outside the building to stick my construction paper heart in the chain link. 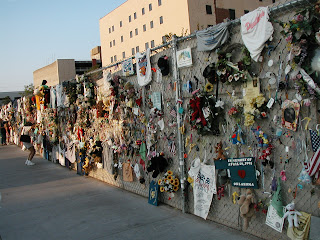 Memorial wall at site of former Murrah building, OKC
Three days later I awoke at five am to fly home to the U.S. I checked my twitter while waiting for our car to the airport to arrive and that’s where I learned that a fertilizer plant in West, Texas fifteen miles north of Waco Texas, where I had lived the last four years before NYC, had exploded. I wanted to hurl my Kindle across the room. What was this? I had been to West a hundred times, I knew people that lived there, lived near the plant even. I had driven by the plant. It was too much. I quickly checked on those I knew were closest to the explosion and satisfied that everyone I knew was safe, I turned off my kindle because I couldn’t go through all the heart wrenching tweets again so soon. 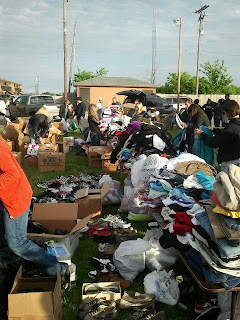 Volunteers sorting donations for West Texas
Mr. Rogers once said that “when I was a boy and I would see scary things in the news, my mother would say to me,

‘Look for the helpers. You will always find people who are helping.’’’ And there have been many examples of this, from heroes at the finish line fashioning makeshift tunicates, handing out free water and food to the injured and racers, runners donating blood, to the outpouring of supplies and shelter in West. Most of my friends in Waco donated blood, some dropped off bottled water and energy bars for emergency crews.  Mr. Rogers’s mom was right. Seeing the helpers helped me more than anything. On the news I heard the story of a runner who had been cut up by shrapnel receiving water and clothes from a fellow runner, the injured asked if he could pay him and the runner responded:” no way, this is what people do, we help each other”. And even in the darkest of times this is overwhelming true. Yes there are people who make and plant bombs with the intention to maim and kill and cause chaos, but for every one of these people there are hundreds maybe even thousands of helpers willing to run towards the explosion, willing to sacrifice their own comfort to help a neighbor, willing to give their own blood to save lives. In a week like this one it is easy to see the darkness and drown in it, but like Albus Dumbledore said there is always happiness to be found even in the darkest of times if only one remembers to turn on the light.