First off don’t hate me for not posting every day like a good blogger should, this thing called grad school got in the way a little bit, but I do promise to try and blog more frequently especially now that grad school is (kinda) winding down.

But that is not why I’m posting. I’m posting because I just read two posts by blogger Brittany Gibbons, read this one first, then this one. The first post is about how she wore a bikini for the first time and the second post is her response to the internet’s response to her Bikini Mountain post. Kudos to Brittany for climbing your personal mountain! You look hot in both of those swim suits! Now I know lots of women, celebrities included, that are bigger or plus sized or chunky or whatever term you want to label to someone else’s body have come out in support of loving our bodies and less fat talk or shaming talk about women’s bodies, but I needed another reminder.

I, like every girl, have struggled with my weight and body image. I was a twig until puberty when all of sudden I started to look like a pregnant 12 year old. Seriously. Everything I ate just seemed to hang out in my stomach forever. It didn’t help that my parents didn’t really push a healthy or active lifestyle. When I was in seventh grade I tried out for the cheer leading squad and made it. I was so excited, until it was clear I was an outsider and the other girls called me ugly and fat to my face. One even barked like a dog at me once; which at the time hurt like hell, now it’s kind of hilarious. I mean really who barks at another person? I quit cheer and found solace in books and the debate team. which are both awesome, but they didn’t help my growing stomach diminish. Storing fat in the stomach must be genetic, because most of the women in my family have this problem. You can read about my cousin Shannon’s tummy hate here.

I used to lay in bed at night and dream about getting liposuction. It’s sad but true. I could picture the doctors sucking out the fat from my stomach and making me thin, and in my eyes beautiful and perfect like the other girls in my school. The funny thing is looking back at pictures from those years I realize, I was a little chunky but I was no where near as fat as I saw myself in the mirror, and that’s the problem. 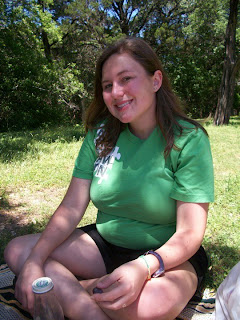 A reminder that good posture goes a long ways, me in college
in my self described “fat stage”

We never owned a bathrooms scale growing up (which was probably good), and I don’t own one now, but I do know at my “fattest” in high school I weighed about 160lbs. I’m 5’2. This past summer, at my “skinniest” I weighed 130lbs. I’ve gone up and down a bit but really for most of my adult life I’ve been 135lb. But in high school and early college I felt like I was obese. I would look at pictures of myself and become instantly ashamed of my stomach, my breasts, everything. I felt fat. 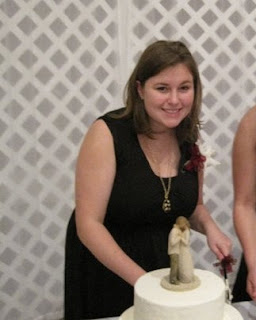 Now I eat relatively healthy and try to be active. This past summer I was my thinnest I’d ever been and I felt great! I even got up the courage to start wearing bikini’s for the first time. But these last few months I have been feeling “fat” again. Grad school is a time suck so there’s less time to work out, and with the snowy New York winter I’ve been curled up inside a lot. 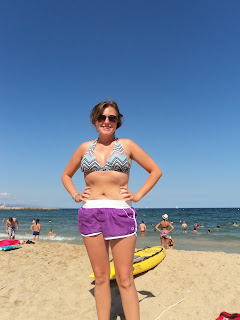 Braving the bikini in Barcelona this past summer 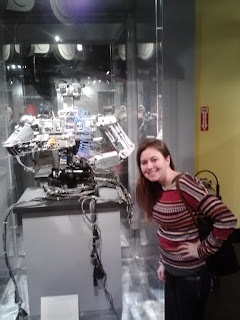 MIT museum this past weekend

But here’s the real issue; I’ve spent most of my life feeling like a whale, when in reality I’m a human. A human with nice boobs and some extra tummy fat. I’ll probably never have a flat stomach, and I need to be okay with that. I’m slowly starting to love my body, but it’s a process. Looking back on old photo’s I’ve never been obese, or even really fat. But the problem is that I saw myself that way. We need to stop letting little girls dream of liposuction and start teaching them that they too can rock a bikini at any weight!! Thanks Brittany for reminding me of this!